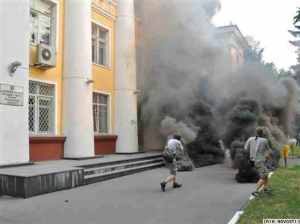 Russian antifascist Petr Silaeva has been reportedly arrested this Friday, June 24th by the Belgian police, in full collaboration with the FSB (the capitalist KBG), as he’s been supposedly under pursuit from Interpol.

There seems to be a total blackout in the European media on this one, even in the more alternative online press and blogosphere (‘til now?). Judging by an Interfax press release in Russian, he is soon expected to be extradicted right back into Russian’s hellish penal system, where usually you never know when you will be released…

Petr was supposedly one of the main organizers for the riot attack against the building of the Khimki regional government during the hottest days of the Khimki defense protests, last summer, as the forest was threatened by a big highway development project, led by the French corporation Vinci.

Since the day he’s been declared an «international criminal» by the Russian government, he escaped the country and went on a long journey as a homeless fugitive, living in the streets or wherever he was welcomed to stay.

This surprising arrest happens at the same time that the two Khimki riot detainees were given a 2 years sentence and a parole, as a new wave of Khimki forest defense is starting. It is furthermore surprising for the unprecedented collaboration between a central NATO member country, Belgium, and the State of Russia into a «joint» repression of green and antifascist dissenters…. or whoever dares doing something against the high corporate crookery of both the EU and Russia.

Petr, was revealed to have traveled a lot in Western Europe and America over the past two years.

We are calling for solidarity actions in defense of international criminal Petr Silaeva, antifascist and green fighter from Moscow.

Even the global crime syndicate and its front the Interpol will not stop our struggle against this barbaric capitalist order.

Solidarity is our strongest weapon!

A mainstream press article in Russian (with pictures), based on the Voice of Russia press release: click here

Here’s an attempted translation of the article:

“’Antifa’ activist Peter Silaev, tracked on the suspicion of the attack on the administration of Khimki in July 2010, is under detention in Europe, as reported to an Interfax source by the law-enforcement agencies on Friday.

Silaev was put on an international search after he had escaped from the country. He is suspected to have organized the attack on the administration of Khimki city on July 28 last year. The man was detained in one of the EU countries”, said the collocutor of agency.

He noted that soon the Russian law-enforcement agencies will obtain official information, once the extradition of Silaeva into Russia is completed.

The antifascist Silaev ran out from Russia abroad, after which he began publishing an the Internet diary where he told about his wanderings in the West European countries. In its records he reported that he could leave the Russian Federation with his foreign papers. Abroad he lived, in essence, on the street or in nochlezhkakh (?), as moved through the European Union.

Young people, covered with black shawls, began to scream out the slogans in defense of the Khimki park. On the building were produced several shots, supposedly from the traumatic weapon(sic), and several empty bottles were cast on the windows.

Investigators of this case concluded the activists as being under the direction of ‘Antifa’ Gaskarov and Solopov. In October last year they were put under custody to prevent them from leaving the country.”