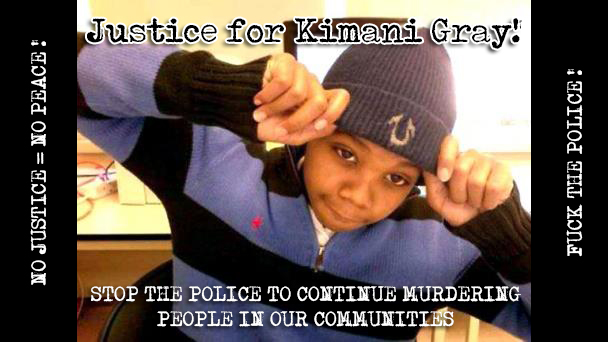 Justice for Kimani Gray!
Jail the Killer Cops!
Drop the Charges Against All the Arrested Protestors!

16 year old Kimani Gray was shot down by cops who filled his young body with 7 bullets, 3 bullets in his back! Immediately, the authorities went to work, claiming that he pointed a gun at the police. Now, a brave civilian witness has come forward to say Kimani had nothing in his hands when the police started blasting. Mayor Bloomberg claims, “all indications” are that his death was justifiable homicide. NO! NO! NO! THIS WAS MURDER; committed by the same police department that murdered Shantel Davis, Noel Polanco, Malcolm Ferguson, Nicholas Heyward Jr., Tamar Robinson, Ramarley Graham, Reynaldo Cuevas, Sean Bell and on and on.

Justice for Kimani Gray! Jail the Killer Cops!
On Wednesday night, the police arrested 46 people, overwhelmingly young people, for trying to demonstrate against the brutal murder of Kimani Gray. But the killers of Kimani Gray walk free! People everywhere must stand with the youth and uphold the youth that defied the police and refused to accept the murder of Kimani Gray in silence. If the youth had not taken to the streets on Monday and Wednesday nights, Kimani Gray would have been just another young person killed by the police and swept under the rug. Instead, with the youth in the streets, it could not be covered up. Their brave action of taking to the streets in the face of billy clubs and guns pierced the silence in a powerful way. We owe a lot to the bravery of the young people.
Drop the charges against all arrested!