[eventually this show was moved to The Place in Greenpoint, where many of these shows have been held]

It’s one thing to support patriotic hardcore and oi! music. It’s even not a problem to be straight up conservative. When you are about fascism and you hide behind being patriotic and anti-communist, someone is going to say something about that.

An upcoming Aug. 31 show at a Brooklyn club is sparking concern amongst those opposed to hate groups organizing on the East Coast. According to an email that has been sent to various groups, including One People’s Project, some of the bands and tablers that have been at recent shows at this club are associated with neo-Nazi, anti-Jewish, anti-Muslim and other hate groups, despite the fact that some of those involved are people of color themselves. 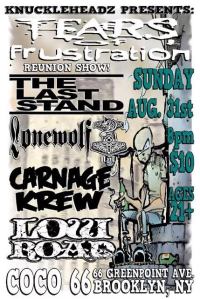 Coco66 in Brooklyn’s hipster Greenpoint neighborhood has been hosting shows over the past two months by Knuckleheadz Productions, who has reportedly had problems at several other establishments in Brooklyn. They have held two prior shows this summer at Coco66 on July 5 – which was called “Skindependence Day” – and July 26. The Aug. 31 show is being promoted as a reunion for Tears of Frustration, a New Jersey hardcore band. The band’s lead singer Joe Falzone (aka Joe Frustration) was a once a prominent member of the neo-Nazi organization National Alliance, and spoke at their Northeast States Conference in Jan. 2004. He has also performed in hate bands such H8Machine, a band that was associated with the neo-Nazi Hammerskins and released albums on the white power Panzerfaust label, as well as the National Socialist Black Metal (NSBM) band Grom. 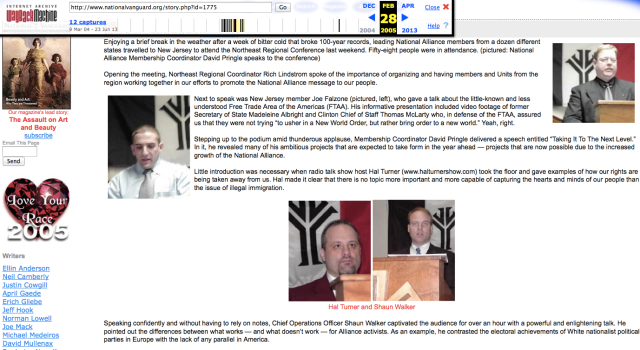 Falzone’s associations are not been the only instance where hate politics are supported. The lead singer of Lonewolf, another band on the Aug. 31. bill, has sparked concern particularly due to a photograph found of him wearing a t-shirt of white power band Skullhead, while standing with a group that included Pat Fahey—a member of the neo-Nazi Vinlander Social Club (VSC) who has been involved with white supremacist activity for over twenty years. In addition, members of local hate groups such as the Atlantic City “Skinheads” (ACS) have been seen attending shows at the venue. Long considered among the most violent hate groups in New Jersey, in the past decade ACS member Walter Dillie murdered a black woman during a 2005 carjacking, for which he is serving a life term in prison, and another member, Christopher Ising, is currently serving a three-year term for his role in a group that included members of another hate group that assaulted two New Jersey men of Egyptian descent in 2011. 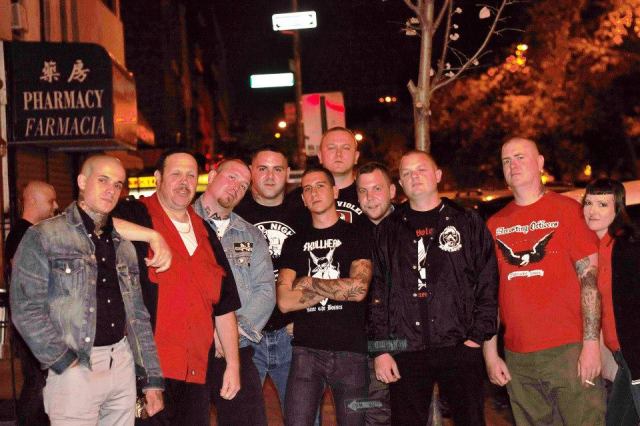 Matt, the lead singer of Lonewolf, is wearing the Skullhead shirt. Vinlander Pat Fahey is wearing the denim jacket with the patch, two persons away from him.

Cody Hoebel of Atlantic City “Skinheads” and of the white power band Chaos 88 is wearing the tank top second from left during the July 26 show.

Political activity in particular has been openly promoted at the shows by the New York chapter of the National Anarchists, who staffed a literature table at both of the shows in July. While they apparently count some people of color among their membership, just as Knuckleheadz Production is operated by a Hispanic man, this has not seemed to temper their hatemongering. The leader of this group, Craig Fitzgerald, for instance, believes that the Holocaust did not happen. “(F)or awhile now the members of [his group] have talked about doing a Holocaust truth demonstration in front of the holohoax museum in NYC handing out a select issue of Barnes Review,” he wrote two years ago on his Facebook page, referencing a Holocaust Denial magazine published by Liberty Lobby founder Willis Carto. More recently he has taken to harassing local Jews online, and his organization endorses white separatism and something called “anarcho-fascism,” suggesting on the group’s blog that “fascism” does not have to mean authoritarianism: “Upon a closer evaluation of the word and its etymology one can see that fascism does not imply hierarchy but rather strength through unity, and some anarchists may want to reclaim the term,” according to Fitzgerald. 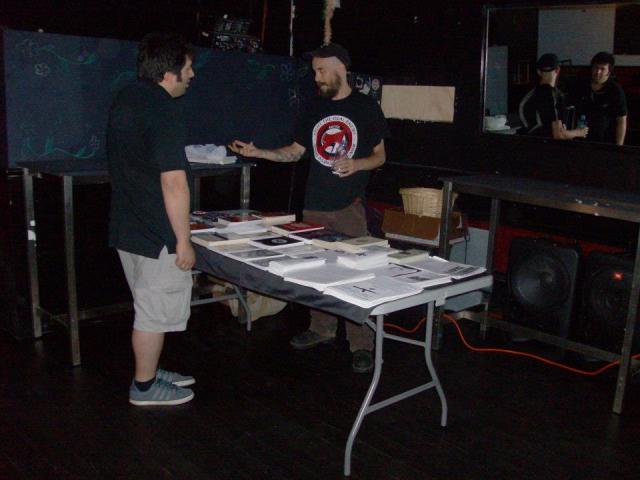 While many of those that have worked with Knuckleheadz have indeed been simply about the music and even include persons of color and those who have fought against fascism, the acceptence of hatemongers participating in either the promotion, the bands and organizations in this scene, supposedly in the name of patriotism, has gone well beyond that and into an open endorsement of one particular version of neo-Nazi inspired activism. Some of the bands that performed the July shows and will perform on Aug. 31 consider themselves part of the Rock Against Communism (RAC) scene. Some right-wing-leaning bands have been drawn to perform under this banner due of the relatively innocuous nature of the term, but it is well known, particularly in the punk scene that these events are a part of, that RAC was started by the neo-Nazi skinhead band Skrewdriver in the 1980s as a way to appear more publicly acceptable.

The RAC logo, a skull biting into a hammer and sickle (the symbol of Communism) is so synonymous with hate activism that it is often listed as one of the hate symbols to look out for by anti-hate organizations. “Those who use the term RAC often do so as a way to camouflage the true nature of the racist music, because the term does not make explicit the music’s racist nature,” according to the Anti-Defamation League (ADL) website. “Thus the acronym RAC is often used to describe hate music offered for sale on on-line auction sites, instead of more explicit labels that might cause site administrators to remove the item. “

In recent years, the Rock Against Communism banner has been updated in some areas to Rock Against Islam, supposedly in response to the concern for terrorism, but really to promote hatred towards minority religious groups associated with recent immigrants. Even this has seen the white supremacist presence, with the now-defunct Nazi gang Volksfront holding a Rock Against Islam concert in 2006, and the neo-Nazi band Kill Baby Kill have a song titled “Rock Against Islam.” T-Shirts for “Rock Against Islam” have been sold at Knuckleheadz shows.

A takeoff on the logo for the neo-Nazi “Rock Against Communism,” this time demonizing Muslims.

This scene not been ignored. RAC bands have been the catalyst of several boycotts over the past few years. According to Brooklyn Vegan, the owner of another club, the Acheron, apologized for booking a recent show which included many of the same bands which have played the last three shows at Coco66. The article noted that people at the Acheron show made racist comments towards his employees, and folks in the crowd were apparently wearing Nazi t-shirts. This show was kept a secret, similar to how neo-Nazis regularly organize concerts, and even at the Coco66 shows at least one of the bands (who have been the past target of boycott calls) kept their appearance secret until after their show.

“We do not have a problem that Coco66 books patriotic skinhead shows, where people wave the American flag and pass out Right-wing and anti-Communist literature,” the email that One People’s Project received read. “We do have a problem that these bands seem to be filled with Nazis; that the bands are playing Nazi songs; that Nazis are in attendance at these shows; that people are using the shows to distribute hate literature and shirts disparaging Muslims, and are advertising for political groups that disparage Jews, deny the Holocaust, and encourage white separatism.”

Coco 66 has not responded to repeated inquiries from One Peoples Project.